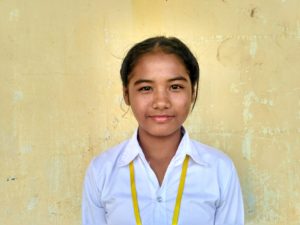 Being a student I ought to have courage to resolve my family conflicts, as well as the conflicts of people around me. Courage is a struggling, an effort, it means to have bold determination to achieve any task that we wish to implement.

I have always tried to help resolve the conflicts of my family, and even my friends, by speaking reasonably and with courage about the problems that I have seen. My father can be a cruel person when he comes home from drinking alcohol and is violent to my mother. Whenever I saw him hurt my mother, I always tried to lure him away and entreat him to not hit her. Because of my efforts he has now stopped his violence against my mother.

I have two siblings and I am the eldest child in the family. My younger brother doesn’t obey my mother’s advice, nor mine as well. He likes hanging out with bad people. My mother was furious when a group of police came to our house to investigate my brother. They told my mother and me that my younger brother was arrested because he’s addicted to opiates. I entreated the police to release my younger brother from jail and I have tried by all means to advise my younger brother to not do anything illegal anymore, but to no avail. In order to support the family, my mother and I grow and sell morning glory vegetables around the village. Sometimes, I also go to help gather neighbors’ rice so we can get a little money to buy food and medicine for my mother.

Regarding the violence in the family and addictive drugs, I wouldn’t like our neighbors’ families to face problems like we have because it means there is not happiness in the family and all of these bad conditions will be blow to other neighbors’ families as well. I use my courage to remind other young kids in the next generation, to not get involved in addictive drugs like my younger brother has done. 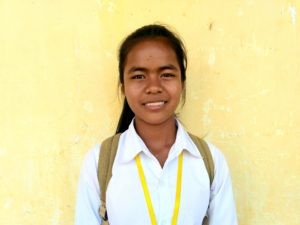 The meaning of courage for me is to endeavor to try very hard to overcome every obstacle. It involves persistence and daring to do what you think is correct and to not care about what anyone is saying. Courage benefits every human, both poor and rich people. Most importantly, we may use courage to help deal with difficult situations.

Here is a story from my culture that helps me stay courageous. It’s an old story about the Queen of Cambodia during the Khmer Empire. She reigned a very long time ago during the era of Srey Ayuthyea. At that time, women asked men to marry them, but there was not any man who dared to become engaged to her because she was the queen and reigned over everyone.

So the queen created a competition for the women to build a mountain (Srey mountain) and the men to build their own mountain (Pros mountain). Whichever team built the highest mountain would be the winners and the losers would have to ask them to marry. The losers would ask and the winners could also say no them if they chose. The women who were not beautiful or charmed liked this idea because it was difficult to engage a man to be their husband sometimes.

The women were very clever. They gathered together to make many lanterns and they flew those lanterns in the sky so that they looked like the morning stars. They wanted the men to misunderstand and think those lanterns were the morning stars so the men would sleep late and not get out of bed to work on building their mountain. Meanwhile the women worked very hard to build their own mountain higher than the men’s mountain. Because of this the men lost the bet, starting from that time, the tradition changed and men must now ask women to be their wife and the women are the ones who are able to say yes or no.

The women in the era of Srey Ayuthyea inspire me because they had the courage and perseverance to demand the right not to engage men to be their husband if they didn’t want them. Women nowadays must be greatly valued and take care of our custom without losing of courageousness. Every woman has the right to achieve any of her duties that she thinks are good enough because courageousness is a very important thing to pull us to reach success.