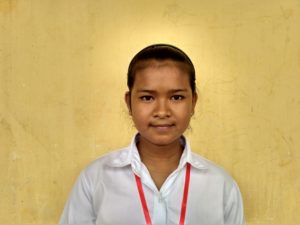 The meanings of courage is to be brave enough to struggle to overcome every type of obstacle no matter how much the difficulties are. I am inspired by a girl in my village named Sothy. Her parents are poor farmers and she is the oldest of three children.

When she was 13 years old her father told Sothy he was going away. He said “My dearest daughter, when I’m not here, please help take good care of your younger siblings, your mother and your grandmother because your mother has not been well and your grandmother is very old. So you are the only who is able to take good care of them when I’m gone.” She asked him, “Where are you going to go, father?” He told her, “I’m not going to go to the rice field anymore. I’m going to go to look for a job near the Thai border to earn and save more money for the family. I’m not sure if I will spend one or two years away before I can get back home, daughter.”

Sothy’s father went away under sad glaring eyes of his daughter and wife who watched him until he was out of sight. Afterward, Sothy was entirely responsible for the family’s burden. Besides going to school, Sothy spent her days earning some money by washing clothes and carrying water for the rich families.

Two years later, Sothy’s family expected the father would return home, but instead a man came to tell her and her mother that he had died in Thailand. Soon after someone else arrived who said that Sothy’s father had just married a new wife. Since Sothy’s mother was a crippled person and had mental problem, Sothy continued to have increasingly more difficulties in her life.

Frequently, Sothy made cakes for selling, she did housework, she did homework and she took care of her mother who always sat laughing and crying alone. Sometimes her mother walked away from home and hid herself at a small cottage. Sothy would go there and screamed out, “Mom, mom let’s get back home!” Sophy’s mother heard that noise but couldn’t even recognize her daughter’s voice. She would furiously growl at Sothy, forcing her daughter to get help from their neighbors to bring her home. Eventually some adults went to inform the village chief and a chief of community about Sothy’s mother. They helped to send Sophy’s mother to the hospital to get treatment and medication so she would sleep well.

For this academic year, Sothy is now 15 years old and she has passed the exam to study at the middle school. She is named as the model student of Cheung Prey district and has struggled to study hard for her family. Sothy is very happy because it seems that she has a new life again because her mother is now enable to do farming and take care of her younger siblings. Sothy determined that she will endeavor to study until she has become a teacher in Kauk Rovieng village. Frequently, she has always advised her younger siblings to try to study hard even though they don’t have a father and they live in poor conditions. Life does not depend on laboring work, she tells them. We create more through learning.

Courage is the strength of every human who dares to struggle against every obstacle in their lives. If we go forth, we must not turn back even if there is something against us. With courage we try our best to achieve that goal. I do hope that the next generation kids will have this same courage.

I once saw a movie, a story about suffering and the consequence of a child’s life beginning at his birth until he was mature. That child’s name was Shanny and he was the son of a king named Preah Soriya (which means “the sun”). When Shanny was born, his skin was a black color, which upset Preah Soriya very much. In fact, Shanny’s father hated him so much that he wouldn’t acknowledge him as his son.

Preah Soriya, thought that Shanny’s mother, Preah Me Chhaya, must have had a secret lover because Shanny’s appearance was so different from his other children. So Shanny and his mother were expelled from the palace to live at the dark place where they couldn’t see the sun. Even though, Preah Me Chhaya tried to entreat Preah Soriya to recognize Shanny as his son, he refused.

Twelve years later, Shanny grew up and was appointed by the God Sevak to become the God of Justice who would judge all karma of every God. Then there was man named Reahou who wanted to defeat King Preah Soriya. Shanny knew about this and he thought that his father, Preah Soriya might be overthrown by Reahou, so Shanny asked his mother, Preah Me Chhaya to allow him to help his father even though he realized that his father didn’t accept him as his son.

This battle was made up by the God Sevak because he wanted to trick Shanny and his father into meeting again. The God Sevak then told Preah Soriya about what had happened. Henceforward, Preah Soriya accepted Shanny as his son and dispatched armies to return Shanny’s mother back to the palace. As for Shanny, he was fearless and did his best to protect the dynasty of his father from Reahou’s attack until he won the battle. From this story I learned about the courage of a lonely person named Shanny who endured against every consequence. All Gods were so happy to see Shanny’s family living in harmony again and from that time, the whole universe harmonically stayed in peace.