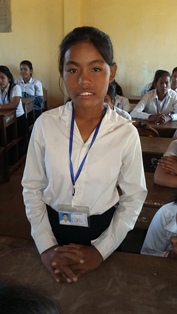 The meaning of courage is to struggle, work hard, have bold thoughts, and dare to express them. It can sometimes mean to suggestion how to solve a quarrel that might be happening around us.

I would like to raise an issue that I recently encountered and dared to think about and solve. I saw my older brother often drinking alcohol, gambling and not thinking of his pregnant wife at home. One day, he was so drunk that he became furious and unfocused. When he came home, his wife hadn’t yet prepared food for him and suddenly he became very angry, scolding and hitting his pregnant wife in a way that was dangerous to her and the baby.

I was at his house to borrow his bike when I saw my older brother and my older sister-in-law arguing with each other. Suddenly, I tried to solve the argument between my older brother and my older sister-in-law so they would stop fighting. And then I asked my older brother, “Why do you hit your wife like this?” I told him, “you know when you use violence on your wife it may cause danger to her or her baby. If you get angry, you just should talk and not use violence.” My brother then looked at me silently and he must have thought that he should listen to the advice of his younger sister because after that he stopped drinking alcohol, gambling and being violent to his wife.

The result of my courage was shown to me when I explained to my older brother to take care of his wife and to quit using violence in his family. Therefore, I would like to clarify that “the courage” isn’t just a braveness to commit something that helps other people, other families and the national society. It can also mean the braveness to dare do something that is acceptable to other people, other families and particularly, the national society, so it’s called “our courage.” 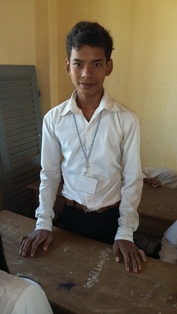 Courage means to struggle, be patient, and overcome all our fears so that we can commit a good deed. But we mustn’t rely on the bad deed of another person to live with courage.

One of our neighbors has a car and motor washing business. He boasted a lot about his power and wealth. His land is higher than my family’s land, so water flows into our property from his business, making problems for us. He often gathered his relatives at his home to drink alcohol and play music until midnight. Many of the nearby folks almost got sick because they couldn’t sleep well when he had parties like this. The villagers asked my mother about this issue, and my mother shared the problems we were having with this neighbor. But people were also afraid of his family because his family is wealthy and related to high officials in the government

One day, I decided to persuade others neighbors to go to his house in order to offer his family some advice about doing good deeds. When we talked to them about the impact of his family behavior on the community, they looked respectful and seemed to accept what we explained. However, when we all returned home, his family still continued the same bad actions.

A little later, my mother had a serious ailment, and many neighbors visited her. My mother was very happy to see the folks who came to visit her regularly. At that same time, our difficult neighbor’s wife also got a serious sickness and almost died like my mother nearly did. He saw other folks coming to visit my mother. But when his wife also got a serious sickness, he wondered why neighbors didn’t come visit her. I told him that the reason folks didn’t visit his wife was because his loud family banquets and music were disturbing the neighbors and causing them to get furious with his family.

When this neighbor learned right and wrong from what I revealed to him, he changed his ways and became a better neighbor. I am very glad to have helped them to live better in the right way.