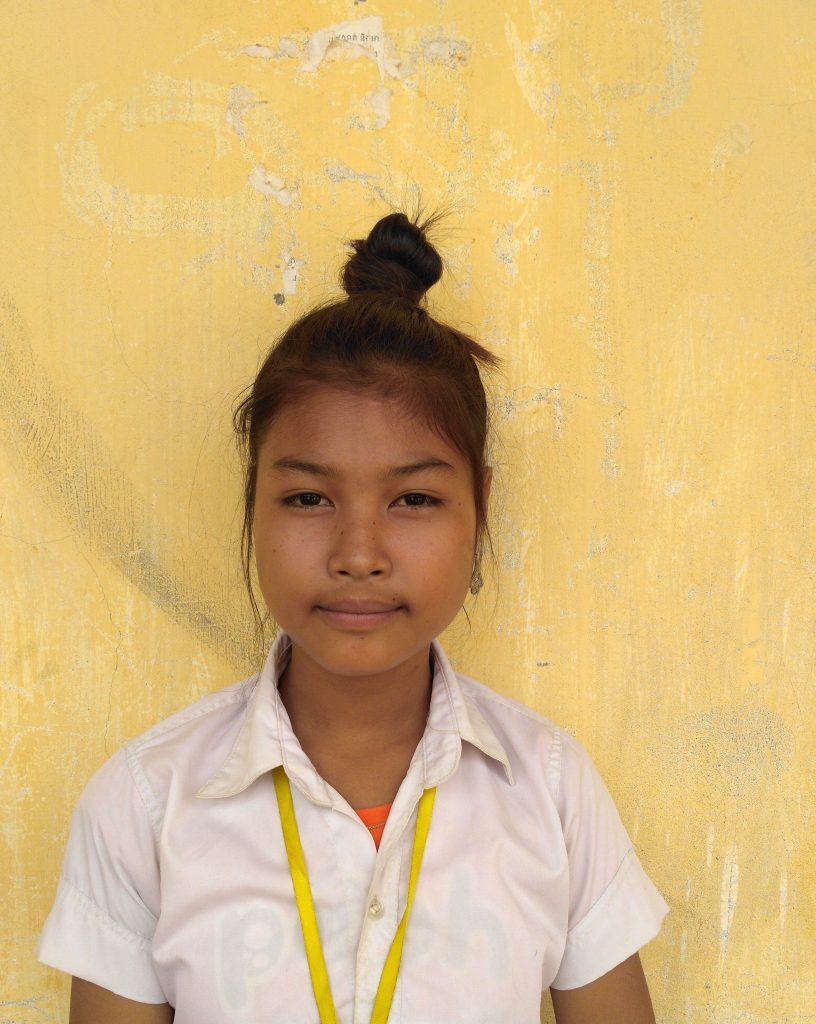 My mother was a widower who worked for a Chinese company in a sugar cane field in Preah Vihear province. I have one older brother. My father passed away when I was a little baby so I never remember his face at all.

My mother worked very hard in the sugar cane fields in order to get money to support me and my brother with food and school supplies. Even when my mother was weak, thin, and often had a cough, she still went to work. One day my mother was so sick that she could not walk and could not go to work as normal. Villagers helped to bring my mother to the district hospital for treatment. Two days later the doctor said that my mother had tuberculosis and that she was in a serious condition. She got thinner and thinner and continued coughing. During her stay in the hospital my brother and I took care of her. We tried to feed her rice and soup, but she could eat very little while she was lying in bed. A few weeks later my mother died in the hospital. I was crying that she left me alone. She passed away when I was 10 years old.

After my mother died, the villagers and the village chief brought me to an orphanage because I did not have any relations able to look after me. I lived in the orphanage from 2014 to 2017 with many other kids that do not have fathers or mothers, and some kids whose families are too poor to support them. I was able to study in grade 4th to grade 7th in the orphanage.

In 2017, my aunt and my uncle wanted to bring me from the orphanage in Preah Vihear province to live in their house here, in the school village. Now I can continue my study in the seventh grade. Before they allowed my aunt to take me out of the orphanage, they asked my aunt and uncle to sign a paper. My aunt and uncle are poor. My uncle climbs palm trees to get palm juice to make palm sugar for selling. He can earn only a little money for buying rice and food. Every day in my free time I help villagers who are selling sugar can juice. I help them to peel sugar cane skin and they give me a little money. I keep that money for buying my studying materials.

For me, courage is when we face problems in our lives, we endure with those, and we stay strong. We keep studying hard and ignore when people say mean things about us. I want all kids to do the same as me, to not give up hope in our lives. 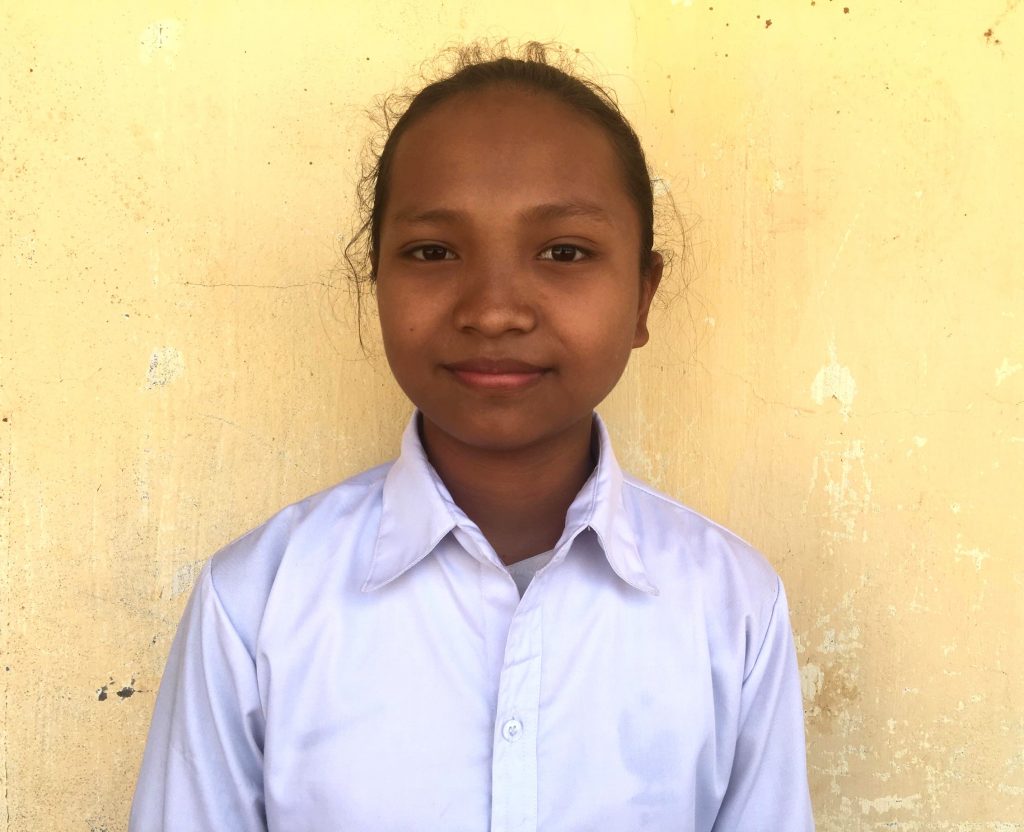 Courage is to face obstacles and difficulties and dare to settle those problems with your eyes open.

My parents are farmers growing rice every year. My mother works hard in the rice field for the family and when she is at home she always washes clothes, washes dishes, cleans house, looks after the cows, and does cooking. My father did not help my mother do that work and he often went out and drank homemade wine with friends. When he came home, he was very drunk most of the time. Every time he got drunk, he always found fault with my mother and sometimes beat her.

One day when he came back home from drinking he argued with mother because he was hungry and my mother had not cooked rice on time for him. He beat my mother by kicking her. Recently he argued with my mother and slapped her on the face. It happened when he asked for some money from my mother for drinking, but my mother did not have money for him to drink. She told him that he should go to work and make money for the family instead of always drinking. Suddenly my father was very angry. He scolded my mother, slapped her, and she cried.

Because my father always beat my mother when he got drunk, I felt ashamed in front of our neighbors because of my father’s bad behavior. I thought to myself that if I do not help mother, one day she will get injured and that will be a disaster for the family.

So I could not stay quiet anymore. I knew I must help my mother. I begged my father to stop drinking and beating her, and to stop creating anymore problems in the family. When I did that my father’s face changed. He looked down and stayed quiet for a while. Then he replied to me that he cared about me very much. He told me that he would stop drinking in excess. Since then my father does not go out drinking like he did before. He helps my mother‘s work in the house, he helps my mother to harvest rice, and he looks after and washes the cows.

He still continues to drink sometimes with his friends, but not very often, and now he only drinks a little, not like the heavy drinking before. He also stopped finding fault with my mother and has changed his bad behaviors.

When seeing a person is being treated badly or being beaten, we should have courage to talk to the person in order to help them change their behavior and to help the victim of their violence. 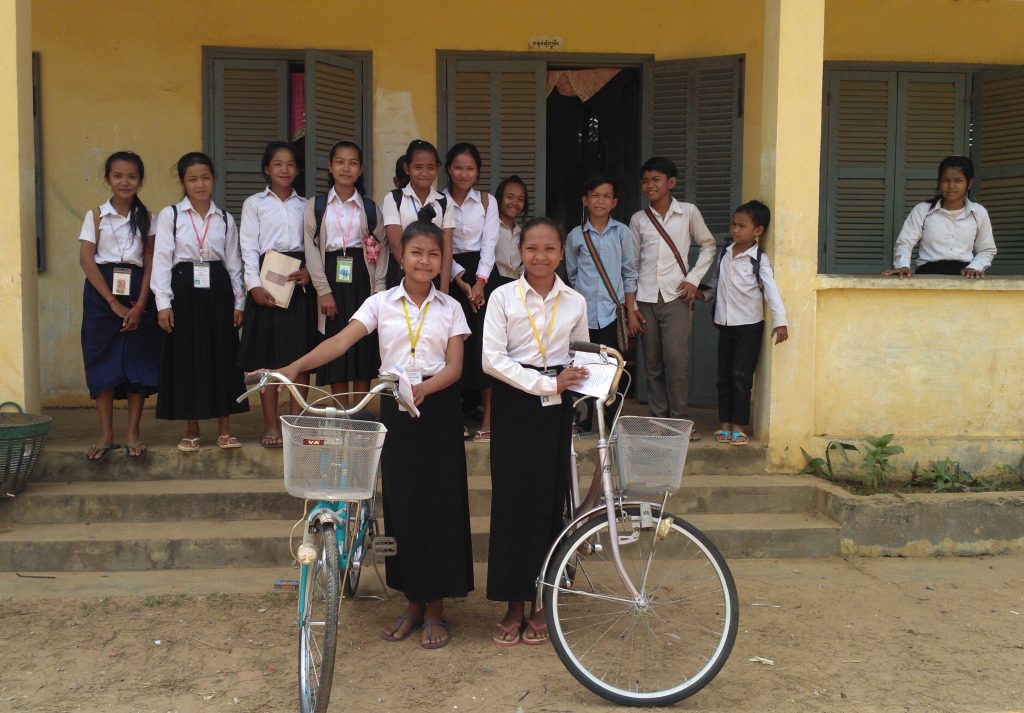